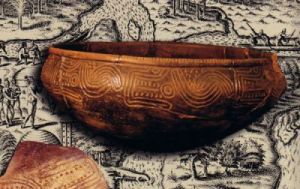 Looking at the pottery that Cahawba’s mound-building inhabitants left behind, we realize one of the most tangible items remaining from their culture was one of the most common of things: the pots and vessels they used everyday to hold water, food and ordinary goods. It raises an obvious question: what will we leave behind? 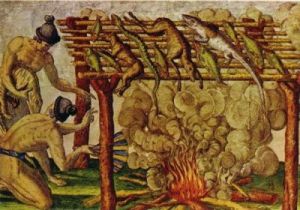 When Paleoindians first reached the fertile, self-renewing landscape of Cabawba, the floodplain forest provided the abundance of natural resources necessary to support large populations. By the beginning of the Mississippian Stage (AD 1050-1540), as the climate warmed intensive agriculture, large sedentary towns and large-scale monument building defined the era.

Cahawba’s mound builders show distinct cultural ties to the inhabitants of Bottle Creek, a major archaeological site located 20 miles north of Mobile Bay. The Indian village at Cahawba in the 15th century marked the northernmost outpost of a society whose political center was located at the other end of the Alabama River. Both cultures are identified with a type of shell-tempered ceramic called “Pensacola Incised.” 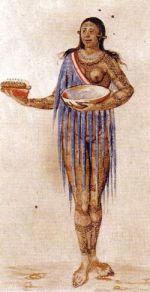 But by the time of Spanish contact in the 1500s, Mississippian culture was on the wane — it is no coincidence that the end of Mississippian culture shares the date that Hernando De Soto marched through Alabama and the Southeast. When the Europeans arrived, Old Cahawba was the site of a large Indian village with a palisade wall and a large mound inside. Soon, that solitary mound would become the most visible remaining relic of what might be called the first “Alabamians.”

Within two centuries of European contact with native populations, possibly more than 50% of the southeastern Indian population had perished from measles, smallpox and other diseases contracted from the Europeans: a silent American catastrophe of shocking proportions. With so many deaths, entire tribes began to disintegrate, their culture and traditions undergoing massive, rapid change. By the mid-1700s, most tribes in the area died out or merged into four larger nations — Creek, Choctaw, Chickasaw or Cherokee. Just as Alabama offered a vital haven for plant and animal species trying to survive the Ice Age, the region became the geographical stronghold for these four tribes before the final influx of Europeans would drive them from the land forever. 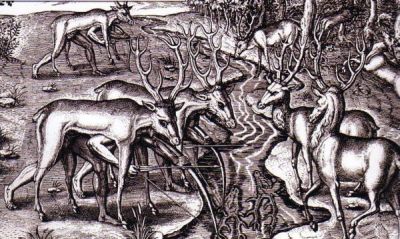